One Facebook, Two Faces [One is Real Ugly]. Here is an attempt, we find hypocracy of Facebook owners

I had been banned from Facebook and my account had been disabled a night before Facebook was banned in Pakistan. Before all this happened, I visited the blasphemous page “Draw Muhammad Day” and the content on the page hurt me badly.

Once again a certain group of westerners called it the “freedom of expression” and went on to show extremism – something they always verbally disassociate themselves from.

The comment on the wall read, “Let’s hit them where it hurts them the most”. Further I added some photos of the Fuhrer, Nazi Party and the Italian Footballer Paolo Di Canio who was banned and fined by FIFA two years ago for performing the “controversial” Roman Salute which according to him gave him a sense of belonging to his people.

Within an hour tens of people joined the Hitler page which was named “H | T L E R”. The very next time I tried to log in I found out that my profile had been disabled for ‘violation of Facebook Regulations’. 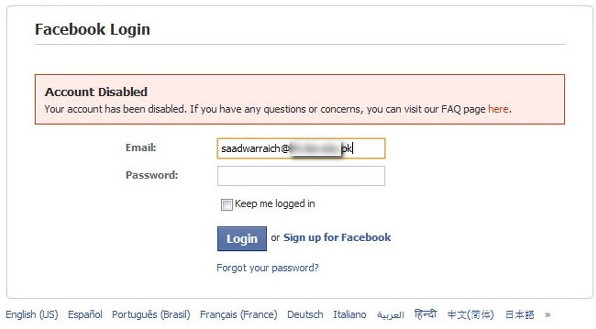 facebook’s reply for my inquiry was as following (also shown in above screenshot):


After reviewing your situation, we have determined that your violated our Statement of Rights and Responsibilities. One of Facebook’s main priorities is the comfort and safety of our users.
We do not tolerate hate speech. Targeting people based on their race, ethnicity, national origin, religion, sex, gender identity, sexual orientation, disability, or disease is a serious violation of our standards and has resulted in the permanent loss of your account.
We will not be able to reactivate your account for any reason.  This decision is final.
Kimmie
User Operations,
Facebook
Now how is it that Hitler is termed as the most evil person in the history of mankind while those that bomb Muslims, commit heinous crimes in their countries, ridicule their Prophet and Quran and as a result hurt the sentiments of 1.2 billion Muslims are hailed as heroes? And I wonder why the victims of Holocaust are more important than victims of Hiroshima and Nagasaki.
Despite the protest of a large number of Muslims, Facebook has not removed the blasphemous page from the website.
According the statement issued by Facebook their policy is to withhold such content in countries where it is controversial. The statement specifically says that we do not remove Nazi content from Facebook because it is illegal only in a few countries. As two-faced statements go, this one takes the prize. Perhaps before issuing the statement the Facebook did not realise that words like “Adolf Hitler”, “Sieg Heil” and “Nazi” are not allowed to be used on Facebook to create new pages.
And if all this and the removal of Hitler page and the permanent deactivation of my profile isn’t enough, here is a testament to Facebook’s vile hypocrisy. The statement issued by Facebook on 20 May says, “We strongly believe that Facebook users have the freedom to express their opinions, and we don’t typically take down content, groups or pages that speak out against countries, religions, political entities, or ideas.”
While, in another instance, Facebook replied me in entirely different way. Excerpt and screenshot is given above.
Now these two conflicting statements speak volumes about the discrimination by the Facebook. It simply means that Facebook through its official statement to global media wants the world to believe that they are the torchbearers of freedom of expression and allow everyone to speak their minds out. On the other hand the face that individuals like me get to see is a much horrible one. It talks about hate and intolerance and all forms of so-called equality and unshakable resolve. While Facebook is portraying itself as the silent and innocent onlooker for the entire world, I wonder what gives them the right to remove a major chunk of my life from the web.
I don’t think Facebook should come up with any clarification statements for the Muslim world over what happened. It is clearer than crystal that as long as we are labelled as extremists, we are not going to enjoy the equal rights in this world. And those that are trying to play God love to label us that. While reporting the Facebook ban in Pakistan in different articles, guardian.co.uk mentions the brutality of Pakistan Army in Swat while Yahoo thinks it’s necessary to unveil Al-Qaida’s plans of attacks on Danish and Dutch football teams. It is a blatant attempt to criticize Pakistan for placing the ban, link the country to extremism and terrorism and thereby justifying this sacrilegious act of Facebook users.

Email ThisBlogThis!Share to TwitterShare to FacebookShare to Pinterest
Labels: Awareness, Think About It...........