This innovative public transportation concept will use free, non-polluting green energy from our greatest natural resource - the sun, to power local commuter rail in Arizona’s major cities and high-speed passenger connections between Phoenix and Tucson.

"Travel between Phoenix and Tucson in about 30 minutes." 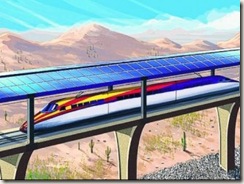 May 26, 2009 Bullet trains are considered by many to be one of the greener forms of transport, so imagine how environmentally friendly they might be if the sun’s power was harnessed to power them. That’s precisely what Solar Bullet LLc hopes to do with its 220mph solar bullet train, which the company claims can travel from Tucson to Phoenix in just 30 minutes.

Although the project is still in the very early stages of development, the company is hopeful it can start operating by 2018.

Initially, trains would run on two tracks reserved for the direct route between Tucson and Phoenix. Eventually, though, four additional tracks would be built to extend the route north and south and take in additional stops, including Chandler, Maricopa, Casa Grande, Eloy, Red Rock and Marana.

The system would need 110 megawatts of electricity to run, which would be generated by overhead solar panels mounted above the tracks, making use of the Arizona's abundant sunshine.

The pair behind the proposed system, retired civil engineer Bill Gaither and his business partner Raymond Wright, believe their timing is right. US President Barack Obama has made it clear he's keen to investigate alternative energy transport projects, and last month he unveiled plans to put money into high speed rail networks around the country. Gaither and Wright are seeking to raise USD$35,000 for a feasibility study.