The device in the picture is more special than others. It is water-resistant and solar-powerd and it will arrive in Japan this June from KDDI. Sharp is the maker and we might expect it to make similar phones in the near future.

Kddi says that as little as 10 minutes of sun absorption will get you two hours of standby or about a minute of talk time. So what would exactly happen at night? No more phone calls? The sun can charge the 80% of the battery which sounds pretty good. That’s a great device for those people that always forget their chargers. All they would need will be some decent sunlight.

How much would you pay for such a phone? Prices and availability dates haven’t been officially announced yet. 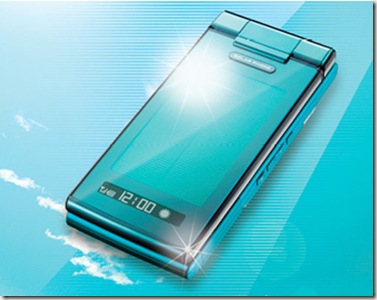 Email ThisBlogThis!Share to TwitterShare to FacebookShare to Pinterest
Labels: New Era in Technology