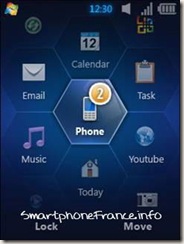 The new interface is designed to be touch-friendly by having a honeycomb home page as well as a carousel menu.
In previous Windows Mobile releases, the items in menus were often too small to use a finger, forcing the user to resort to a stylus. Windows Mobile 6.5 hopes to change this by having a large scrolling menu that enlarges the current object and provides additional information for it. The honeycomb menu shown above allows the user to quickly select their task. Tasks that are used more often appear closer to the center of the screen.
As previously reported, Windows Mobile 6.5 has been confirmed and could be ready by the first quarter next year.
Neowin will continue to keep you up to date on Windows Mobile 6.5 as the details arrive.