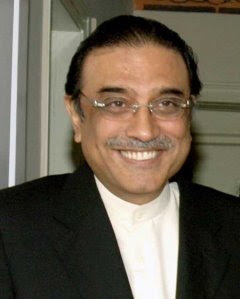 The US
has been in a bizarre state of semi-war against its ‘ally’ Pakistan for
months, launching covert ground and air raids into its territory while
claiming to be a close ally of Islamabad in the so-called war on terror.

Pakistan, first under the US-backed dictator Pervez Musharraf, and now
the new, US-backed president, Asif Zardari, has been put in the
impossible position of waging a small war at the behest of Washington
against its own pro-Taleban Pashtun tribesmen in the frontier zone
known as FATA (Federally Administered Tribal Areas) that is bitterly
opposed by most Pakistanis and regarded by many as treasonous.

Zardari,
the widower of the late Benazir Bhutto, is inherits this dangerous
problem and a host of other ones. Pakistan is almost bankrupt, with
less than eight weeks of hard currency reserves to pay for vital
imports of food and fuel. Half of Pakistan’s 165 million people live on
less than $2 daily.

Financial and political support from Washington helped engineer Zardari
into power. He has been put in charge of the millions a month in overt
and secret cash flow from Washington - $11.2 billion officially since
2001 - that Musharraf used to buy influence. Contrary to Washington’s
claims it was neutral in the race between Zardari and his rival, former
Prime Minister Nawaz Sharif, Washington spent a great deal of money and
energy trying to sideline Nawaz, who has long been unpopular in
Washington as insufficiently responsive to US interests.

Zardari became notorious
as ‘Mr. 10 per cent’ when he was minister of public contracts during
his wife’s tenure as prime minister. Zardari claims all the corruption
charges against him were politically motivated and denies any
wrongdoing. But many Pakistanis, particularly in the powerful armed
forces, are not happy seeing as their new prime minister a man of
dubious reputation and a penchant for personal excess.

Even so,
Zardari has apparently assumed all of the sweeping powers held by
former president Musharraf. Now that Zardari is seen as Washington’s
new Musharraf, these charges against him will redouble. Few outside his
People’s Party see Zardari as an ideal choice for Pakistan’s leader in
a time of growing crisis, but he may yet rise to the occasion. He has
certainly pleased Washington by vowing to prosecute the internal war
against pro-Taleban tribesmen and aid the US-led war in Afghanistan.
Rising violence along the Pakistan-Afghanistan border threatens a far
wider crisis. There have been frequent clashes between Pakistan
paramilitary units and US forces attacking inside FATA. A major overt
US commando raid against a Pashtun village inside Pakistan killed up to
20 civilians last week and brought threats from Pakistan’s chief of
staff, Gen. Afshaq Kayani, the 650,000-man armed forces would fight to
defend the nation’s territory.