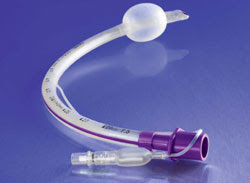 Clinicians at the Washington University in St. Louis conducted a
study on the benefits of coating endotracheal tubes with silver to
prevent the spread of infection, which often leads to pneumonia in
already seriously ill patients. We are guessing that it was C.R. Bard's
Agento® I.C. silver-coated endotracheal tubes that were used in the
study.

Kollef indicates that about 80 percent of patients are intubated
for less than 10 days. Looking at just the first 10 days of intubation,
the silver-coated tubes were associated with a 48 percent reduction in
VAP, and when VAP occurred in patients with silver-coated tubes, it
occurred later on average than in those with uncoated tubes.


Silver kills bacteria and yeast by sticking to the organisms'
enzymes, genetic material and other molecular components, preventing
basic functions and interfering with reproduction. These organisms very
rarely develop resistance to silver, and the metal has no known side
effects in humans.


The new endotracheal tubes are coated with a silver-containing
polymer, created by C.R. Bard Inc., that releases silver ions to the
surface of the tubes. There, silver exerts a broad-spectrum
antimicrobial effect, reduces adhesion of bacteria to the tube and
blocks the formation of biofilms, communities of microorganisms that
build up special protective structures on surfaces.
Posted by Unknown at 22:14

Email ThisBlogThis!Share to TwitterShare to FacebookShare to Pinterest
Labels: New Era in Technology