The two-metre class (diametre) Solar telescope, which will be the
largest in the world, will be set up in Ladakh and the exact location
is being decided," Hasan said while delivering a lecture "Excitement of
modern solar Astronomy" at the Nehru centre here on Saturday.

"The project is over Rs 100 crores and will be operational by 2012 and
will be made available to all researchers from the world," he said
adding it could be remotely operated from the Indian Institute of
Astrophysics in Bangalore.

Although it is an Indian initiative, large number of solar astronomers
are in the advisory board in addition to scientists from Tata Institute
of Fundamental Research, Physical Research Laboratory, Interuniversity
centre for astronomy and astrophysics and others, Hasan said. 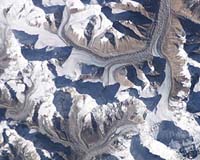 The two other solar telescope slightly smaller than the IIA proposed
solar telescopes will be ready in Germany (2008) and in Los Angeles, US
(2009) and are one and half metre class telescopes.

Although US is planning for the largest (four metre) Solar Telescope,
currently it is on hold, he said. Even if it comes up, it will be after
2016, he added.

"There seems to be a renaissance even in terrestrial solar telescopes
all over the world," he said. The detailed concept and feasibility
reports of the upcoming telescope are being prepared and the telescope
will be imported.
Posted by Unknown at 17:32

Email ThisBlogThis!Share to TwitterShare to FacebookShare to Pinterest
Labels: Pakistan, Think About It...........