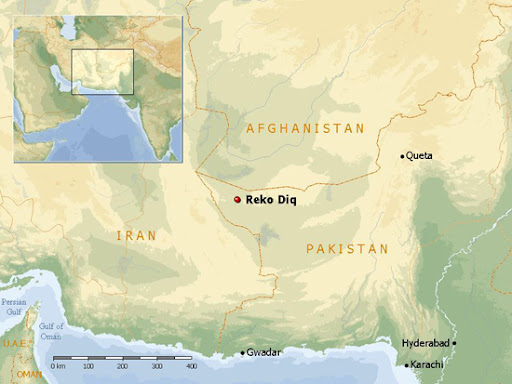 
Tethyan Copper of Australia has taken the contract to develop this mine.

Barrick Gold Corporation of Canada and Antofagasta of Chile have a
joint-ownership of the copper-gold deposit at Reko Diq.
The Reko Diq deposit is being explored by Tethyan Copper Company Pty
Ltd (75%) and the (BDA)Balochistan Development Authority (25%).

Tethyan Copper Company is held jointly (50:50) by Barrick Gold
Corporation and Antofagasta Minerals.
Currently the deposit is at scoping / pre feasibility stage. It is a
world class copper / gold porphyry style deposit, typical of the
tethyan belt.
It was recently sold to the foreign controlled regimes by the Pakistani
Government at a price of $21 billion. Rough estimates suggest that the
gold and copper at the surface accounts for $65 billion worth of
deposits.


Tell me how many of us know about it ...remember the total debt on Pakistani Nation is $38b,


Now the question is why Pakistani media and Govt is silent about it?


Why it is being kept a secret from Pakistani Nation? 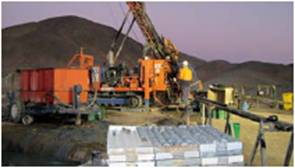 Tethyan
Copper's big-time copper/gold potential at its Reko Diq project in the
wilds of Pakistan has turned the Perth-based explorer into a $101
million takeover target.

Hong Kong merchant banker Crosby
Capital and an unnamed consortium of investors have bid 64¢ a share for
the group, spun out from Perth-based nickel producer Mincor in 2003.

The
bid price represents a hefty 32 per cent premium to Tethyan's 48.5¢
closing price yesterday - a depressed level that reflected the general
recent sell-off in copper explorers.

Tethyan is expected to
label the bid as opportunistic and one that seriously undervalues
growth potential. The "global" resource at Reko Diq has been put at 5.5
million tonnes of copper and 9 million ounces of gold.

Work at Reko Diq - a BHP Billiton discovery in the 1990s - is well advanced on a "starter" project on the H4 copper deposit.

A
heap leach/solvent extraction operation - producing 40,000 tonnes of
copper a year for more than 15 years at a start-up cost of $150 million
- is the plan.

It is very much a starter project, as the main
game at the remote desert-at-altitude location will be a "mega"
project, as Tethyan likes to put it, costing several billion dollars.

The
mega project would seek to exploit Reko Diq's status as one of the
world's biggest porphyry copper/gold systems. Production of more than
200,000 tonnes of copper and 400,000 ounces of gold annually is the
ambition.

Crosby noted that Reko Diq was in a very early stage of development, without a completed bankable feasibility study.

"The
development risks for the project are exacerbated by its future funding
requirements, which even on the H4 starter project alone, would require
an amount that is a multiple of the current market capitalisation of
the company," Crosby said.

Despite making the bid, Crosby also
talked down the project's location, saying there were "operational
risks in Pakistan" and "territorial risks" because of its proximity to
Afghanistan and Iran.
Posted by Unknown at 18:49

Email ThisBlogThis!Share to TwitterShare to FacebookShare to Pinterest
Labels: Think About It...........